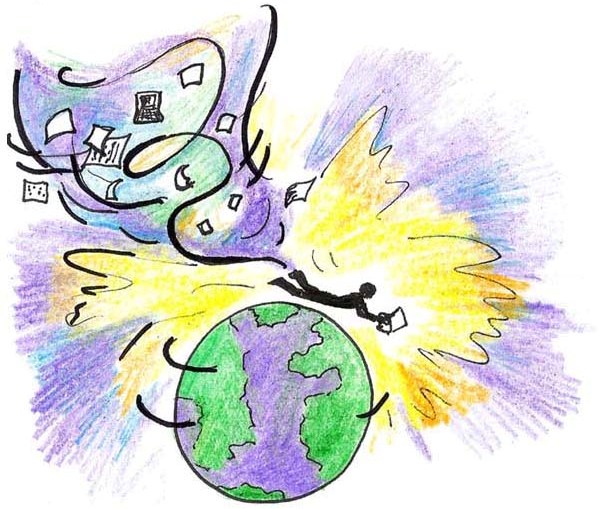 A CEO just asked me how to get his people under control. He believes he’s doing everything right so it must be his people who are all wrong. He reminds me of the teacher who prepares all summer and then come fall the wrong students arrive.

Even those smart enough to rise to positions of influence sometimes think the forces of good are only available from order (control) and the forces of evil are epitomized by chaos (kaos). I’m no Agent 99, but when anyone tells me they will get through a possible recession or the school year by clamping down on employees, students, customers, markets, or even time, I feel an urge to shout into my shoe.

Some aspects of leadership and learning will always be uncertain and out of our reach. Chaos is not our enemy; it accounts for the immune system, nature, boiling water, honey, the stock market, motherhood, and innovation. Chaos is change at work.

Chaos theory doesn’t avow the universe lacks order. It reminds us order is intricate and changeable, and that we ought to stop constantly trying to direct and predict.

Statesman and futurist Harlan Cleveland (1918–2008) — one of the smartest people I have ever met — offered some hints from his own experience on how to conceive, plan, organize, and lead organizations in ways that best liberate ingenuity and maximize choice:

No individual can be truly in general charge of anything interesting or important. That means everyone involved is partly in charge. How big a part each participant plays will depend on how responsible he or she feels for the general outcome of the collective effort, and what he or she is willing to do about it.

Broader is better. The more people affected by a decision feel they were consulted about it, the more likely it is that the decision will stick.

Looser is better. The fewer and narrower the rules everyone must follow, the more room there is for individual discretion and initiative, small-group insights and innovations, regional adaptations, functional variations. Flexibility and informality are good for workers’ morale, constituency support, investor enthusiasm, and customer satisfaction.

Planning is not architecture; it’s more like fluid drive. Real-life planning is improvisation on a general sense of direction, announced by a few perhaps, but only after genuine consultation with the many who will need to improvise on it.

Information is for sharing, not hoarding. Planning staffs, systems analysis units, and others whose full-time assignment is to think should not report only in secret to some boss. Their relevant knowledge must be shared, sooner rather than later, with all those who might be able to use it to advance the organization’s purpose.

The most productive organizations flex enough for people to follow their heart while everyone does enough of what other people need them to do. If we demand people only do as they’re told, critical work goes unnoticed. If people have the authority to think for themselves (and could anything be more chaotic than that?), there’s a good chance they’ll see more broadly about their job than anyone else could.

Humans are capital not in the sense that they exist, like a five-axis machine sitting on a factory floor, but in the sense they can transform information and energy into more useful forms.

If someone tries to sell you control by clamping down on chaos, make sure you don’t get suckered into paying too dearly. For organizations to thrive, we need to figure out approaches, technologies, models, and systems which honor our whole-selves in the board room as much as in the lunch room and that generate enthusiasm, if not outright joy.

Nothing could be smarter.

Learn more about Harlan Cleveland from his book Nobody in Charge: Essays on the Future of Leadership (Jossey-Bass, 2002) and the opening chapter (excerpt) of my book, Creating a Learning Culture (Cambridge, 2004)