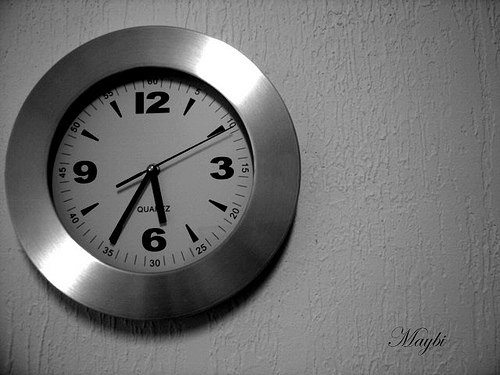 When my husband was leaving a long-time job, the exit interviewer asked if a different role would make him stay. He had envisioned one, but he didn’t mention it.

He imagined himself outfitted with a piece of deadwood. When he found someone who no longer added value to their teammates or another part of the company, he’d tap them on the shoulder, listen for an echo, then say the magic words, “It’s time for you to go.”

We’ve all visited a workplace (if not your own then a store, a courthouse, a school, the DMV) where the light in people’s eyes have gone out although they haven’t left the building. Garry Ridge, CEO of WD-40 Company, describes them as, “People who could be more magnificent elsewhere.” They serve as a reminder that retention programs and sabbaticals have their place. So do sunset clauses, exit strategies and friends who care enough to say things we don’t want to hear.

If we are committed to learning and growing, we must be equally committed to unlearning and stopping. Without actively letting go and moving along, where will we find room for something more?

Just as tree leaves fall to create space for something new, every organization has people who would do better elsewhere. Likewise, each of us has habits, processes, policies and beliefs worth changing with the season. Some changes require a radical departure from what’s come before. Others may only need a few steps, but steps toward leaving things behind nonetheless.

While this might seem like common sense, our practices are anything but common. It’s as if leaving a job or ending a venture necessitates talking in hushed tones. Heck, disconnecting from anything for long — be it email, twitter, or social network de jure — has somehow become taboo, a politically incorrect dénouement. Are we so stuck on the playground that we always equate quitting with failure? Those who stopped smoking or eating too much, or even flipping out over getting onboard an airplane would tell you that an end was their beginning.

What happened to trusting ourselves and the world? When we believe in ourselves, trusting the universe to handle the rest, we’re ready to experience freedom. Think Indiana Jones and the Last Crusade as he steps off the cliff in the cave, faithfully believing a bridge will appear.

Todd Parker of Taproots shared with me this Zen aphorism: A well-read professor was on vacation in the Far East searching for knowledge. He visited a wizened monk the professor had heard knew the secrets of life. As the professor chronicled his journey and everything he had heard about the monk, the monk quietly smiled and boiled water for tea. The professor continued with his stories as the monk began to fill the man’s cup. The professor signaled he had received enough tea but the monk kept pouring, and pouring. The professor cried, “My cup is overflowing. You see it’s full. You can’t add any more!” yet the monk kept pouring. The man, whose pants were now wet with spilled tea, stood up about to leave when the monk finally spoke. “Your cup was full, and there was room for no more. You must first empty your cup if you wish it to be filled.”

Who amongst us hasn’t sought one more piece of knowledge, snuck in one more call or stayed in a role past the point where we knew we should go? When do we make time to empty the cup? How do we expect to innovate, lead or even thrive when we’re stuck.

Not taking action is usually an unconscious decision to go with the flow and hang on to what we have. Finishing something, or even ending prematurely because we know in our hearts it should be done with, requires a different skills, another view of our priorities and a conscious effort to be someplace else.

This month I’ll close down a project I’ve been advisor to for years. I’m both uneasy and energized by the prospect of bidding it farewell, reminding myself daily we can no longer afford the emotional and financial drain, simultaneously knowing I’ll miss the people and the work very much. What prevents me from abandoning wrap up is a realization we made a difference, we learned, and once on the other side, we’ll make way for something new in newfound time.

While I don’t suggest full-scale dropping out for the sheer thrill of fewer things to do… (although let’s all take a moment to fantasize about what that might feel like. Ahhh.)

…perhaps we should adopt one more practice. If we’re not ready to change up a few big things, let’s get rid of at least one less-than-stellar something a month.

Less is more and all that.

Years after my husband imagined his perfect job, our friends Anne Derryberry and Ellen Wagner put the idea to use in their own way. After time served in the roll-up firm that had acquired their company, they found themselves sticks and tapped one another on the shoulder. Then they called us and told us it was finally their time to go. They’ve never looked back.

In the comments here, tell me what you will leave behind this year.

Time for You to Go
Tagged on: unlearning
86 cities across the globe, speaking and consulting with people transforming organizations and the world around them.

Engage With Me Today

Changing the World of Work: One Human at a Time 2014

Opting In: Lessons in Social Business from a Fortune 500 Product Manager 2012