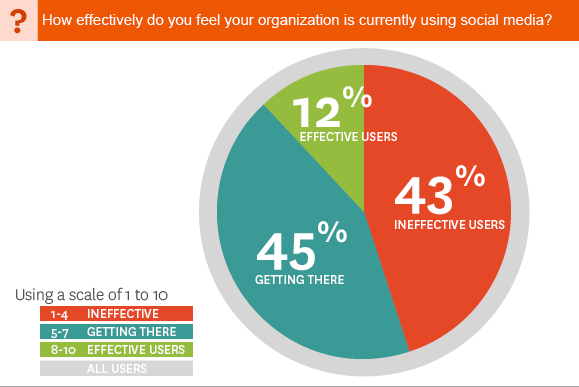 Seeking the source of a specific statistic that I included in a talk? In followup to my list of websites with data relevant to social business, many people have asked for pointers to interesting data about social media, social business, and engagement. While it’s easy to think of social business as social media-like tools for use inside of a company, I mean it to imply the larger opportunity to connect people, information, and actionable insights. That can begin within a company, and often stretches outside any one organization’s walls to connect with the people the business serves.

My aim will be to update this list as I discover more numbers that make points better than words. New additions will be marked (new w/date). Consider bookmarking this post so you can return to it again.

Although face-to-face will remain the most prevalent form of customer interaction, CEOs expect a step-change in the use of social media. Over 1/2 expect social channels to be a primary way of engaging customers within five years. 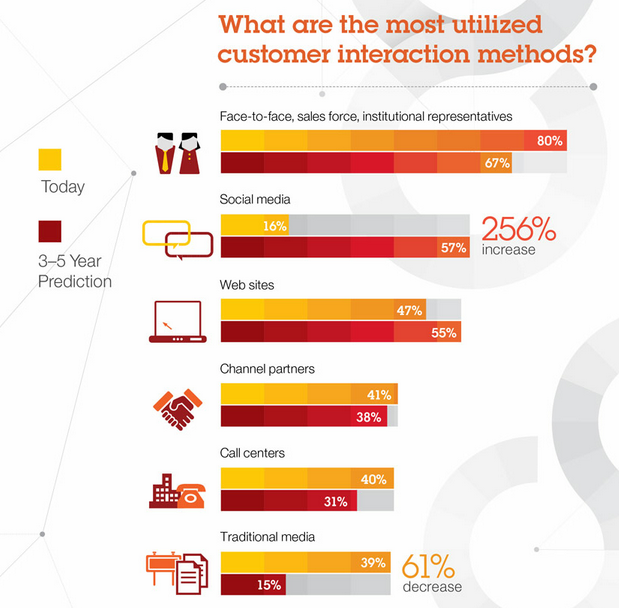 Currently, social media is the least used of all customer interaction methods. However, CEOs predict it will push past websites, call centers and channel partners, and become the #2 way to engage
customers within the next five years.

73% of CEOs are making significant investments in their organizations’ ability to draw meaningful customer insights from available data.

Views on social media vary widely across industries. A higher percentage of CEOs in education (77%), telecommunications (73%) and retail (72%) expect social media to be a key channel for customer engagement. In industrial products, only 34% of CEOs believe social media will play a significant role—the lowest of all industries; insurance (51%) and electronics (52%) are below the overall average.

95% of standout organizations will focus more on “getting closer to the customer” over the next 5 years (IBM Global CEO Study 2010).

57% of financial outperformers are more likely than underperformers to use collaborative and social networking tools to enable global teams to work more effectively together (IBM CHRO Study 2010).

Companies with highly-engaged employees have 26% higher revenue per employee.

2% increase in customer retention has the same effect on profits as cutting costs by 10%.

There are more people on Facebook (901M) than in Europe, Russia & Middle East combined (780M).

90% of people under 30 in US are on a social network. 50% of the world population <30. Social networking accounts for 22% of all online activity.

Over 1 trillion connected intelligent devices across the world.

79% of companies are using or plan on using social media. 58% are using it. 21% are planning to launch something.

69% predict that their use of social media will grow, 61% admit the need to overcome a learning curve before adopting any kind of social media strategy. Just 32% view it as an executive priority.

Just 20% of social-media-using organizations have dedicated a portion of the budget to it, though that rises to 44% among effective users.

14% cite responding to findings from social media, such as quickly resolving an issue raised via one of the social sites.

13% say that finding qualified staff who can work on social media activities is a challenge.

12% of the 2,100 firms surveyed feel that they are using social media effectively, by going above and beyond the typical megaphone marketing. They are monitoring trends, promoting their brand and researching new product ideas. 43% feel they are using it ineffectively. 45% believe they are getting there.

11% believe the use of social media for business purposes is a passing fad.

Social media use among small businesses was up 8%, from 73% spring 2011. Constant Contact’s Fall 2011 Attitudes and Outlooks Survey.

About 60% of those surveyed said they respond to comments they received through social networks, whether they’re negative or positive. The 40% who aren’t regularly responding to comments said the didn’t because:

The University of Maryland’s Smith School of Business looked at the relationship between social media and small businesses and found that the technology adoption rates in the U.S. doubled from 2007-2009 from 12% to 24%.

97% of customers will purchase from your business based on a review they find on the product they are looking for, even more so the review is through people they trust.

eMarketer reports that 78.2% of boomers are online and using mobile. That’s 60 million adults. Even as their numbers decline, that penetration rate will remain high through 2015. And they control more than $2 trillion in annual spending.

Boomers also stay connected on the go. eMarketer estimates 86.9% will have a mobile phone this year, and 16.9 million boomers will access the internet from a mobile browser or installed app. In 2015, that number will reach 25.4 million, or nearly 40% of boomer mobile users. This is a market that content providers, game publishers and brand marketers should not pass by.

92% have more confidence in info found online than they do in anything from a salesclerk or other source Wall Street Journal, Jan 2009

Why do they share? 46% feel they can be brutally honest on the Internet. 38% aim to influence others when they express their preferences online Harris Poll, April 2010

45% say they are influenced a fair amount or a great deal by reviews on social sites from people they follow with 46% saying that reviews in newspaper or magazine influence them. Harris Poll, April 2010

43% of us will seek advice from a friend, family member or colleague before making a purchase. GfK MRI, June 2010

34% have turned to social media to air their feelings about a company. 26% to express dissatisfaction, 23% to share companies or products they like. Harris Poll, April 2010

Reviews on a site can boost conversion +20%. Bazaarvoice

In addition to continuing to update this page over time, I’ve also created a Scoop.it page focused on Data on our Social World. Consider following that page for regular updates, infographics and various things I find.

If you have favorite stats or sources of stats on this theme, please send them my way and I’ll include in future updates. Together we are better. The stats prove it.

Social Business by the Numbers
Tagged on: analytics    data    Facebook    HR    IBM    marketing    performance
86 cities across the globe, speaking and consulting with people transforming organizations and the world around them.

Engage With Me Today

Changing the World of Work: One Human at a Time 2014

Opting In: Lessons in Social Business from a Fortune 500 Product Manager 2012