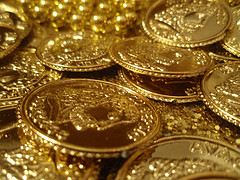 Today is Learning Styles Awareness Day, a modern holiday akin to Talk Like a Pirate Day (or World Toilet Day). It’s the brainchild of Dave Kelly, whose stated objective is “to get as many people talking about the topic at once as possible, sharing ideas and research.”

While I wonder if Dave wants this day to serve as a megaphone, where others who share his not-to-be-revealed-until-today bias get loud and rowdy, I applaud his effort to raise awareness and give attention to perspectives that may not support how he personally feels. In other words,”Ye, attention at ye bow for the idears deserve the horizon and not ye narrows.”

As I walk onto the deck, let me provide some background. Spoiler alert: my experience has taught me that  learning styles offer treasures and this post will not throw them overboard.

In 2004 I published Learn More Now, which contains a chapter on learning styles and includes a learning styles assessment also freely available on my website for anyone to download. Since releasing the book, oceans of educators and individual learners have used the assessment, and many of them have shared with me personal stories that grew from their new insights. The book has sold over 100,000 copies and sells better today than it did early on. I share that not to boast, rather to express I’ve traveled these seas and will continue to do so with others for years to come. Arrrrr.

With so much exposure, I’m contacted often by people who share eye-opening stories of how learning style insights impact how they approach life or has lead them to more meaningful relationships with people they love.

The most memorable of these experiences was a man who came up to me at an event where I was speaking (about something else). He said he wanted to thank the person who had saved his marriage. He had been assigned my book as mandatory reading in a course, and read it begrudgingly. As he read about learning styles, though, he realized that his wife wasn’t being ornery when she said she preferred the symphony or concert to his beloved movies. She wasn’t being mean by talking to him non-stop, or reading to him entire passages of books while he was watching TV. She wasn’t being thoughtless when she asked him to describe his day at work, or his conversation with an old friend, or analysis of his doctor’s visit. Seeing him and holding him weren’t enough. She wanted to hear from him. In the same way, he wanted to see more of her and share what he saw with her.

They talked about their individual styles, not that the other couldn’t hear or see, but that there were ways they could meet one another’s needs they’d never thought about before. He said he wasn’t being overly dramatic that this saved his marriage. He had come to believe his wife was a mystery he could never solve (or even find some useful clues about) and the style insight creates space to wonder if there were other areas where he could ask her how and why she was making requests. He no longer made assumptions about her behaviors. He said after almost 20 years of marriage, they were closer than ever and made a game of guessing their friends’ styles based on what they fought about.

Water Under The Hull

Why did I embark on this journey? I hated school. I wavered between thinking I was dumb because I couldn’t pass written tests (or spell) and that teachers were mean for forcing me to sit through long lectures when I grasped what they meant after a few words. After seventeen years of frustration and inconsistent messages, I was diagnosed with several learning disabilities. It felt like I was given a new dawn. A burden was lifted from my shoulders. There were words to describe what had short circuited the usual learning process and there were people out there somewhere who shared my experiences. Perhaps they had found  methods I could use to compensate and maybe even learn more.

Then another cannon fired. I learned that these same learning disabilities (learning differences, if you prefer) were identified when I was in third grade. My well-meaning elementary school chose not to tell me or my parents for fear the labels would “stunt this bright articulate child.” The school system denied me insights and accommodations that might have made school a place I welcomed going, where I could participate on balanced footing.

Upon learning this, I let go my anger. Instead I sought to learn all I could about how I learned so that I could accomodate for myself in every moment forward. With the help of a card catalog and some patient St. Louis County librarians, I armed myself with the then burgeoning notion people learned differently from one another. I’d considered this idea before, but now I grasped it on a grander scale. It wasn’t my learning disabilities that told the whole story of how I learned best. That was one factor amid many. I could set my own course and advocate for myself when I found myself struggling based on the unique ways I take in information. Books on tape. A handful of silly-putty. Describing in words what was being shown in pictures. Talking through a problem. Look at what wasn’t working and search out a strategy that would.

I didn’t look back to wish my teachers had changed their lesson plans. But when I was struggling, I wish I had been able to ask for help mapping what was being presented to how I might take it in more effectively. The great stone carving didn’t say, “Teach everyone to his or her learning style.” The Temple of Delphi said, “know thyself.” Who amongst us has the right to say an insight that might prove useful about how we take in information should be kept from us, or belittled, or labeled as born from ignorance?

Was there evidence that analyzing and acting on what I’d learned about myself helped me? I read books I would never have considered reading before. I made strides in confidence that lead me to find golden treasures. For the first time in my life I didn’t feel trapped by education’s island. I felt liberated by learning’s sky.

I’m not in favor of any company selling their wares as the magic bullet to make everyone smarter. Discovery and understanding are multi-faceted, and learning styles are just one of many facets. If someone tells you otherwise, they may have a gangplank to sell you next.

I don’t advocate teachers or trainers ever trying to create programs that provide an even bounty of visual, auditory, and kinesthetic/tactical inputs. This has the potential to distract everyone so no one benefits. If you find yourself in a classroom where someone has put stimulated visuals on the ceiling, avoid looking up, then tell that their well-intentioned efforts are overwhelming to you.

I wouldn’t suggest that people buy into assessments about human nature that present the outcomes as never changing or unrelated to all context. As our senses break down with age, we naturally begin to rely more heavily on those still working well. Learning happens in situ, even if many of us also find some perceptual modes often seem more effective that others.

And I’m deeply saddened when people who usually rip apart testing as a waste of time or a placebo, rally against learning styles assessments as being psychometrically unsound. This would be akin to saying you have no validity telling me I’ve used too many pirate terms. I may not agree but it’s an insight I might benefit to consider. Adjusting my behavior as a result may lead me to better results, even if you didn’t provide a double-blind test. What I think those who make this argument mean is that because there might be grey areas, or subjectivity, or the voice of authority mixed in, the danger is greater than the gain.

What danger comes from helping people know themselves better? I’ve personally introduced learning styles information at junior high schools. Can anyone argue that young teens can use more awareness about themselves?

I can’t accept that people who think learning styles are dangerous secretly believe most people are stupid and if they take an assessment they will come to believe they can (or should) stop using their other senses. To date, I’ve not seen a learning styles assessment ever be used to label someone as “without potential” as some of the most famous psychometrically sound tests are used for every day.

Even if you don’t believe learning styles exist, why deny common language to describe people’s experiences has value? I can differentiate between the brain images showing people aren’t right or left-brained, but that doesn’t negate the pearls in the metaphor.

Just as I am astounded by anyone telling others who they can or cannot marry based on their own assessment of how the world works, I am perplexed by anyone telling other people that the insights they choose to glean about themselves–and the choices they make as a result of those insights–are wrong or any of their business. I can’t understand what motivates anyone to rally hard against the thoughts and choices of others. You may hate the pirates, but don’t talk trash about the maidens.

If you come across someone dead-set on sinking the whole ship, in the name of bettering someone else, ask them to remember a time when they personally struggled to learn something, then ask them to reflect on how they might have benefited if someone had showed them a new tack that would calm the voyage ahead.

Set Your Own Course

In the hands of learners themselves, learning styles assessments have less potential to pigeonhole than to help people fly. Learning is a natural process. So is curiosity about how we can get better at getting better.

In addition to being able to describe myself as an auditory, learning-motivated, small-group, introverted, big picture learner; I welcome the labels of mom, daughter, wife, writer, consultant, and member of many communities. None of those descriptions limit my (or your) ability to be more, do more, or learn more. They serve as telescope lenses we can look through to gain perspective in a big world. May each perspective you gain bring your horizon into clearer focus. The seas await you. Now go kick some booty. Arrrrrrr.