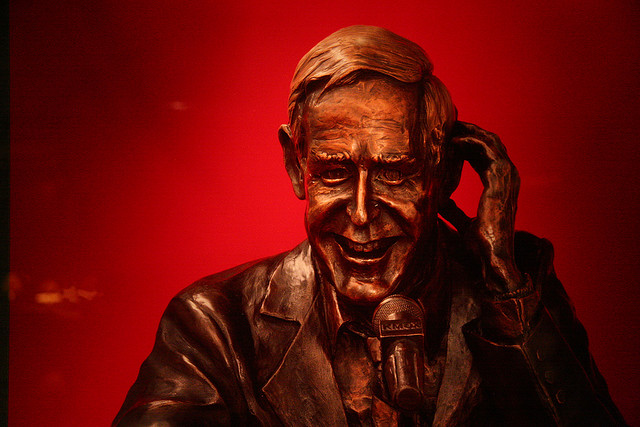 During summers when I was growing up, sportscaster Jack Buck hung out in our kitchen, speaking from the radio to my mother, Ann, nearly every night.

In St. Louis, Jack’s voice was a presence in hundreds of thousands of homes. He brought Cardinals baseball to life. He shared hours of commentary, anecdotes, and statistics related to the players and their game–our game, a game shared by my mother and the country.

As the 2011 Cardinals’ season surprised everyone, I found myself thinking and talking about baseball more than usual. I recounted how hard it was to start college in Wisconsin the year after the Cardinals beat the Brewers 4-3. I shared the secret that my mother would have left my father for right-handed pitcher Bob Gibson had he asked. And I giggled when thinking about how my grandmother said her four children were conceived to the sound of Harry Caray calling a game.

Only some of these are the types of color Tim McCarver and Jack’s son, Joe Buck, sprinkled into their World Series broadcasts. How wonderful that data can now also stream from baseball fans and their families, like mine.

Social media at this point is as integral to the game experience as keeping score or enjoying a hot dog and beer. It facilitates a dialogue between people who don’t know one another, yet share a common bond.

During the post season, a banner behind home plate has even encouraging spectators to connect on Twitter using the hashtag #postseason, giving fans an opportunity to both share and learn from one another instantly.

These new social tools provide researchers unfiltered access to fan’s experiences, stories, and perspectives, which they can analyze and report. The University of Southern California (USC) Annenberg Innovation Lab (AIL), in partnership with IBM, is using advanced analytics technologies to uncover hidden sentiment from the Twitterverse around this year’s post-season play, for instance. While traditional media amplifies which teams and players fans love, gathering and analyzing why fans feel the way they do provides a new view on an old game.

Analyzing the massive explosion of baseball information capitalizes on a growing trend toward “big data,” the tools and processes to harness insights found within gigantic data sets. This project provides a real-world example of how the sheer amount of information on demand need not outstrip our capacity to manage or access it in useful ways.

Gleaning insights from big data carries value across all aspects of baseball, from media outlets covering reactions to the game and players, to businesses marketing to fans, and to players and coaches themselves. Analyzing data to generate actionable insights in baseball affords major league teams better decision-making to create productive ball clubs year after year. For example, Oakland A’s GM Billy Beane has become famous for the use of analytics, as seen in the best-selling book and motion picture, Moneyball.

“Understanding fan (or consumer) sentiment–about baseball, movies, fashion trends, the latest mobile phone and more–versus what the so-called experts might predict will be a hot seller or trend can transform the kinds of make-or-break decisions that large and small businesses are faced with all the time,” said Professor Jonathan Taplin, Director of the USC Annenberg Innovation Lab. “And it can help companies and people make those decisions before it is too late, like what kinds of promotions to run, whether to sell a new fashion to the masses online or introduce it on Main Street.”

More proof the significance of these statistics can reach far beyond baseball? Consider analysis by St. Louis stock broker Alan Skainkaa. He found that the last ten times the Cardinals won the World Series, the stock market has had an up year.

As Jack Buck used to say, “That’s a winner.”

Marcia Conner consults with the world’s largest organizations on getting better at getting better. She recently published The New Social Learning: A Guide to Transforming Organizations Through Social Media.  Learn more about her work at MarciaConner.com. Follow her at twitter.com/marciamarcia for more than big data and baseball-related tweets.