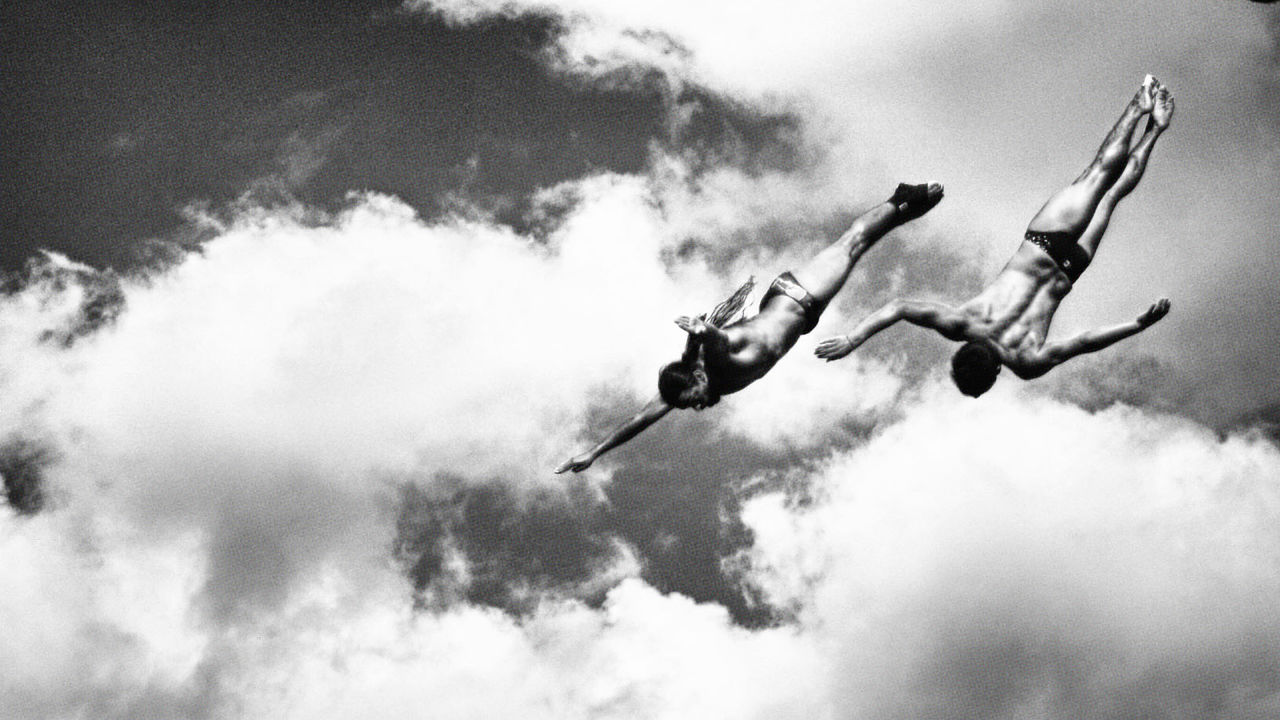 A young man dives from a 30-foot cliff over a waterfall inside Casa Bonita, a Mexican-themed “entertainment” restaurant in Denver, Colo. That’s his job; he dives again and again for the enjoyment of dining patrons. Between dives he admits, “I have yet to have a day where I don’t want to go to work.”

Most people aren’t that lucky or brave. We don’t often get to practice our craft again and again, let alone get cheered on to dive in or climb back up. Doing it every day doesn’t mean it doesn’t require courage, that it’s not hard, or that there aren’t risks; there are just more reasons to keep doing it in spite of the what-ifs.

Leadership, in large part, requires jumping in head first, lapping back and forth, occasionally leading a pack, but often leaping alone, usually in a race against the next guy. But for all the talk of collaboration and big ideas, new business practices, and social reach, most work hasn’t changed much.

Fundamental people practices in modern companies were forged in an era when control and conformity were thought useful. Today, we know they stifle creativity and customer focus at a time when companies fail on less.

As we seek options for ourselves, we don’t always think to remind people there are collective options to elevate us as a species. As Diana Korte, a women’s health advocate, once wrote, “If you don’t know your options, you don’t have any.”

Our digital world accelerates change and gives us an opportunity to be more of who we are. With almost unlimited access to information, we also have a greater understanding that the world needs our help. We expect twists and turns in our journey, but where we are today shouldn’t suck.

“Look for people who will aim for the remarkable, who will not settle for the routine,” said David Ogilvy.

Leaders spend endless hours on hiring, and you may ask candidates to fill outexhaustive assessments, but even if you view their resume for four minutes, you probably make your fit/no fit decision in far less time: On average, it takes six seconds to decide.

When it comes to actually making the hire/no hire call, decisions are usually based on tacit and ephemeral qualities and can be completely derailed if the candidate has the wrong shoes.

How do you find people with the talents, skills, and culture traits who will perform like your best and brightest? Even if you’ve streamlined the process or hired a mind-reading recruiter, your success still requires taking a risk.

I’m surprised more organizations haven’t adopted practices like those of IBM, which uses behavioral science to address all facets of the hiring process.

IBM looks very closely at the individual, job, team, and organizational characteristics that define top performers. They ask how people are actually working today, what they are capable of accomplishing, and what the organization needs to do in order to succeed. From this they create dynamic profiles that ensure great candidates are hired and deployed in roles complementary to their unique traits.

IBM realized that the big data analytics engines they’ve already focused on street traffic and social media uptick, law enforcement, and wind power could be turned next toward predictive hiring. This scientifically grounded approach predicts which candidates will perform like top performers with consistency and accuracy.

Their behavioral assessments also look at measures like how much more profit their best employees in key job families produce than the average employee.

They’ve been slowly rolling these capabilities out for other companies through their consulting practice, and time will tell if others dive in.

Once fully staffed, leaders hopefully turn their attention to retention. Around 2.5 million Americans voluntarily leave their jobs each month. Imagine if you could anticipate why your top people might leave and take action to stop them. Leaders (and coworkers) want to keep the best, reducing the costs and craziness that comes with the revolving job jar.

According to The Conference Board, job satisfaction in America is running at less than half (47.7%). A recent study said 32% are actively looking.

From a leadership perspective, these are easy problems to solve, yet they’re ignored year after year.

New technology can help with predictive retention too, illuminating which employees are most likely to leave and what you can do to stop it.

Mobile phone providers have been triaging this sort of thing for years. They bombard you with attention before your contract’s up. They have predictive technology that recognizes, “Marcia might switch carriers.” Based on her previous spending habits or her love of water, maybe we can entice her to stay with a waterproof phone or ads that depict the ocean. If that doesn’t work they make a personal call.

Imagine if your employer called to say, “We’d be crushed if you left. Are there things you haven’t felt comfortable saying that I might take care of so you wouldn’t think about making the move?”

A third keeps-us-up-at-night area for leaders of organizations full of holes is filling talent gaps. Even I’ve realized at times it’s easier to find new people to deal with today’s demands than for me to develop the talents I need for tomorrow.

According to Accenture, 66% of CEOs anticipate losing business to competitors due to talent gaps. A recent study conducted by McKinsey shows 72% of academic institutions believe graduates are prepared for the workplace while 42% of employersbelieve entry-level professionals are equipped to enter the workforce. In a Deloitte report 39% of CEOs say they are “barely able” or “unable” to meet the demand for the people they need.

In a report from SHL CEB, 77% of HR professionals worldwide don’t know how their workforce potential is affecting the company’s bottom line. Fewer than half of organizations surveyed use objective data about staffing to drive business decisions about people. Yikes.

We get so stuck in the work itself we lose sight of those we serve. Who’s ready, how are they ready, and what will it take for others to be ready starts with identifying what’s really required to succeed, then creating an environment to make it happen.

As you take even a few steps toward creating a culture of learning and caring, people gain confidence and much-needed courage. Doug Conant, former CEO of Campbell Soup, once said, “It’s unrealistic to expect extraordinary effort and performance without creating an environment where people feel extraordinarily valued.”

Now that leaders occasionally notice people matter we should look at the behavioral science behind how and why people do things, how they work best together, what factors increase the likelihood for success, and then do those things. Too soon?

Workers today are driven by a desire for personal fulfillment and success by doing meaningful work as part of an important and valued mission. Employees want to choose where to work, how to work, and when to work. How’s that going?

Are you optimizing the work environment? Ask the people in the organization if the environment meets their needs. Too bold?

Rather than a “we need more” programs perspective, I ask what’s preventing people from doing what they were hired to do. It’s not all radical; it’s just more common sense than seems to be common. Beside, if we don’t know how to quantify what people do with actual and useful measures, it’s going to be damn hard to assess after we remove the obstacles in people’s paths.

Ninety-five percent of respondents to a study from American Express, from all income levels, genders, and age ranges, agreed that the road to success would likely involve detours and unexpected changes. It is within our power to actually make work work, using new analytics and the smarts in our heads, so people can stop detouring around their potential. After all, as Eleanor Roosevelt once said, “It takes as much energy to wish as it does to plan.”

Are you ready to take the leap? Take one step closer to the edge and choose to make one courageous decision a day that as a leader you know, deep inside, you can’t NOT make.