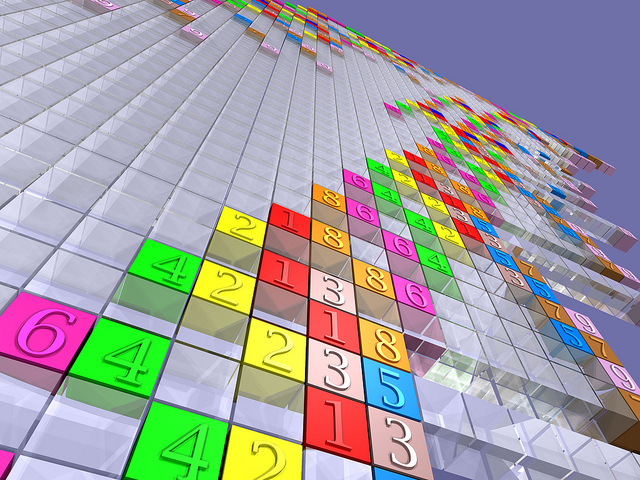 As I wrote “Time to Build Your Big Data Muscles” for Fast Company, I discovered more fascinating bits of data about big data than I could include in the article. Here are some of the eye popping details.

If all these numbers make you wish for a reference guide, James Huggins answers How Much Data Is That? and BroadbandHub offers a terrific video guide helps with the relative size of internet data.

In 2012, every day 2.5 quintillion bytes of data (1 followed by 18 zeros) are created, with 90% of the world’s data created in the last two years alone. As a society, we’re producing and capturing more data each day than was seen by everyone since the beginning of the earth.

This vast amount of digital data would fill DVD stack reaching from the Earth to moon and back. To put things in perspective, the entire works of William Shakespeare (in text form) represent about 5 MB of data. So, you could store about 1,000 copies of Shakespeare on a single DVD. The text in all the books in the Library of Congress would fit comfortably on a stack of DVDs the height of a single-story house.

The world’s technological per-capita capacity to store information has roughly doubled every 40 months since the 1980s according to Martin Hilbert and Priscila López.

Given that unstructured data accounts for 80% of the data in the world, and we know much of that is from social media that gets special attention.

How much data is generated through social media tools?

Data specific to the job market

Recent estimates from the US Bureau of Labor Statistics project a 22 percent increase in demand for professionals with management analysis skills between now and 2020. This is faster than the average for all occupations. Demand for the services of these workers will grow as organizations continue to seek ways to improve efficiency and control costs.

Employment in the Massachusetts big data sector alone is expected to more than double over the next six years according to a recent report by the Mass Technology Leadership Council. MassTLC projects that the State’s total Big Data employment could grow by 50,000 jobs for a total of 120,000 jobs by 2018, making it one of the state’s key economic drivers.

Despite high unemployment rates, a lack of skilled workers means many vacancies remain unfilled. Even at the height of the crisis, the OEDC reports more than 40% of employers in the US, Australia, Japan, said they couldn’t find people with the right skills. 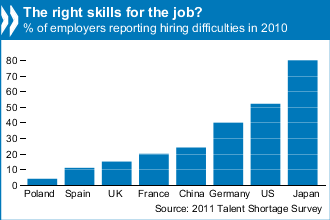 40 Terabytes: Data generated every second from nuclear physics experiments at the Large Hadron Collider at CERN. (The Economist)

10 Terabytes: Sensor data produced by a jet every 30 minutes of flight time.

1.25 Terabytes: The amount of data the human brain can hold. It performs at roughly 100 teraflops. (Ray Kurzweil as cited by IBM’s Tony Pearson)

1 Terabyte: Structured trading data collected by the NYSE each day the market is open.

40%:  five-year compound annual growth rate (CAGR) growth for worldwide big data market. The growth of individual segments varies from 27.3% for servers and 34.2% for software to 61.4% for storage. Infrastructure technology for big data deployments is expected to grow slightly faster at 44% CAGR. Storage, in particular, shows the strongest growth opportunity, growing at 61.4% CAGR through 2015. (IDC)

$900 Billion/year: cost of lowered employee productivity and reduced innovation from information overload. Despite its heft, this is a fairly conservative number and reflects the loss of 25% of the knowledge worker’s day to the problem. The total could be as high as $1 trillion. (Basex)

15 (out of 17): Number of industry sectors in the U.S. that have more data stored, per company, than the U.S. Library of Congress (McKinsey)

Leslie Johnson at the Library of Congress created a full post listing all the reports that compare the amount of data to those of the LoC called, How many Library of Congress does it take? She also wrote, Defining the “Big” in Big Data and Data is the New Black. Follow her @lljohnston.

Information overload was first mentioned in 1962, in an article entitled “Operation Basic: The Retrieval of Wasted Knowledge” by Gertram M. Gross.  The problem was predicted by Alvin Toffler in Future Shock (1970), and in 1989, Richard Saul Wurman warned of it in his book, Information Anxiety.

Examples of new software tools include MapReduce and Hadoop. While Hadoop is more widely talked about and used, a recent article reported that MapReduce was successful in sorting a petabyte file of 100-byte records on a system of 8000 computers in 33 minutes compared to the six hours it took to accomplish the same task on a cluster of 4000 machines in 2008 (see  “Sorting Petabytes with MapReduce  – The Next Episode,” September 2011). From OEDC.

“Interactive: Analyze your smile,” Forbes.com, March 3, 2011. A Web-based application to use your computer’s camera to track your emotions over time to identify what portions of an advertisement you found amusing.

While the tools keep getting faster, the data sets are growing larger. According to Chris Anderson, “Petabytes allow us to say: ‘Correlation is enough.’ We can stop looking for models. We can analyze the data without hypotheses about what it might show. We can throw the numbers into the biggest computing clusters the world has ever seen and let statistical algorithms find patterns where science cannot.” (Anderson, 2008.)

Big Data, the Next Frontier for Innovation from McKinsey Global Institute, 2011

Future Work Skills 2020: Computational Thinking from Apollo Research Institute. More in a one of my previous posts, 10 Skills for the Future Workforce.

While working on the article I also asked my social network for suggestions on books that introduce people-centric practices to data-driven people. While none of the responses were precisely what I was looking for, I heard about many books I haven’t read and you might enjoy learning about too.

Other recommendations sent privately:
On related topics, I mentioned:

If you have a suggestion, please send it to me directly or include it in a comment after this post.

@jonhusband made a compelling case for the movie Pleasantville:

“Pleasantville shows people finding their ‘voice”, coming to life, frantic desire of town hierarchs to stop/control, etc. and all that w nary a hyperlink ;-) Best movie (simplistic) about the +ve side of linking, sharing & finding & using voice.”

Messy data are a fact of life. So is the unstructured term data. Singular or plural? @theeconomist

If you’re curious how your workplace, your family, or your school can take steps now to increase their big data thinking: Learn more about computational thinking, a growing field that shows how science and math can apply to all aspects of modern work.