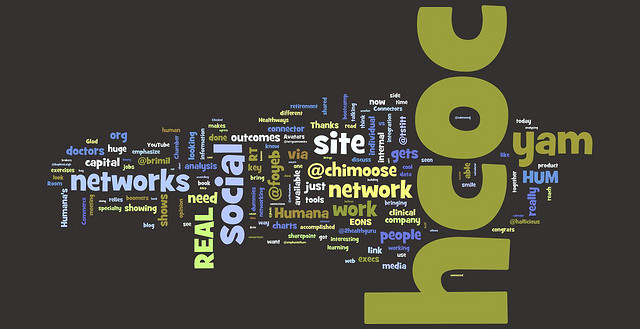 Forming a committee to develop a social media strategy didn’t seem right to Greg Matthews, director of consumer innovation at Humana. He saw advantages in encouraging the company’s 28,500 employees to begin to incorporate new practices, and wanted to demonstrate an alternative approach to even the early work. His team’s charter, after all, was to explore the leading edge of technology and business practices, and to act as a conduit to bring those practices into Humana’s ecosystem.

Five minutes before meeting for the first time with the people Matthews refers to as the “uncommittee,” he framed a plan: encourage the representatives from 14 departments across the company to use Twitter to take notes of the meeting, broadcast their ideas, and collectively watch the conversation stream so that they could learn which ideas resonated across groups.

They established a code “#hcoc” (in Twitter lingo called a hashtag because it begins with #), used in each tweet to track the conversation for Humana Social Network Chamber of Commerce, and set out to learn what happens when form follows function.

Before you conclude, “We couldn’t do that” or “Our organization doesn’t support Twitter within our firewall,” keep in mind that at the time of this meeting, neither did Humana. Some reports estimate that more than 70 percent of large organizations today ban Twitter, Facebook, and other social media tools within their firewalls.

Yet Matthews (@chimoose on Twitter) recognized that most of the uncommittee members carried personal, smart mobile devices (one reason they were familiar with the practice of microsharing, or microblogging), and they could use them to tweet during the meetings.

With widespread adoption of mobile devices worldwide, organizations that believe blocking social media access is their best defense, sidestep considering how the tools already help their employees succeed. Rather than banning social media tools, companies ought to consider educating their employees on how to use the tools responsibly and to begin learning how these tools can benefit more people. Workplace learning professionals who understand these tools and who can make a case for their use are in a strong position to help their organizations navigate and climb new terrain.

Although Humana’s uncommittee is still new and each member has a different full-time job to keep them busy, they know that health, and the health system, has to change. For Humana to continue leading through innovation and focusing on consumers, they have a steep climb ahead. Working socially (through microsharing, and in a distributed way) stretches their capabilities and accesses 28,500 other people who can help.

They’ve presented to IT on issues of security, access development, and toolsets, sharing what they have learned first-hand to at least help the technical teams see wider options. They are beginning to meet with and talk to Humana’s legal team on issues of intellectual property, compliance, liability, and indemnity. And that work synchronizes perfectly with human resources as they focus on creating a culture of collaboration: hiring, training, and recognizing people for sharing.

To get as many other people ready as possible, Matthew’s Consumer Innovation team also created a series of self-guided training modules for employees to learn about various social media tools without becoming overwhelmed. People can spend a little time each day to get up to speed and gain a sense of how these resources can help them.

“LinkedIn in 15 Minutes a Day,” for instance, offers employees a chance to learn enough about the new media to have some comfort when testing it out on their own. Other 15-minute courses introduce the basics of Twitter, YouTube, and Facebook. The team has also created custom content intended to facilitate sessions on subjects including RSS feeds and readers, blogging, search engine optimization, and social campaigns 101.

After meeting, Bonnie C. Hathcock, Humana’s senior vice president of human resources, became curious about what was happening on their internal microsharing system, so she created an account and logged in. (Also referred to as “Enterprise Twitter,” there are web-based applications, comparable to Twitter, designed specifically to work within an organization, sometimes as SaaS and other times inside the firewall. Some internal microsharing tools, including Socialcast, Yammer, Socialtext Signals, and Present.ly, allow for messages longer than Twitter’s 140-character limit. Some do not.)

The first question Hathcock asked was, “I am seeking to understand why people would use [this tool]. Feel free to respond and share how or why you use it.” She was pleasantly surprised by the quantity and quality of responses she received. In nearly 80 replies, she heard comments including, “I use it because it makes a 28,000-person company feel like a 280-person company. It makes [our organization] smarter, more nimble, and more personal.”

The experience attracted Hathcock to the idea of using microsharing as a vehicle to connect with more associates. Her responses echoed her newfound appreciation for this unlikely medium. “I love the positivity about our culture… I am equally interested in what we could do to be better. [We all] create the defining difference in establishing and sustaining a distinctive competitive and adaptive advantage.” She was able to use a simple tool, which took very little time away from the rest of her responsibilities, to engage with people across her organization, and to learn from them—and them with her.

Humana’s uncommittee seeks and answers questions through meetings every few weeks. Rather than big bulky presentations, they continue to share information in short bursts. On the agenda are brief updates from the last meeting, a quick presentation from a member on how his department is using social media (what is it, how and why did they do it, and what have they learned), a slightly longer interactive presentation from an outsider who offers a fresh voice, and a few updates from one or more workgroups.

While there’s nothing groundbreaking in their approach to meetings, Matthews reports that it’s the only team he’s been on that has nearly 100 percent attendance at every meeting. People get out as much as they put in and have specific details and insights—answers to their organization’s challenges—available to them from others who are thinking about similar things. It also helps that they’ve created an environment to learn where no one has the authority to tell them to stop doing what they’re doing or that what they’ve done is wrong. It’s a learning work-in-progress.

Between meetings, they continue to tweet and use their internal microsharing system. This gives them both answers in real-time and a sense of who else in the organization is uncovering solutions that might apply in another department. For example, they learned techniques for creating and promoting YouTube videos from Humana’s marketing team (who had created the “Stay Smart, Stay Healthy” video), to create their own video, “Crumple It Up” (www.youtube.com/crumpleitup). The little gems, the answers between the questions, keeps the learning continuous and fresh.

Since that first cross-department uncommittee get-together, social approaches to working together have spread throughout Humana. This can be credited to a network approach where no one department owns social media for the large organization. Individual groups, often with separate customers and demographics, consider their individual social media needs and budgets, knowing people in other groups are there to support and assist.

They’ve fused high- and low-tech solutions for connecting people with information. On one hand, Humana was early among large companies to get information off of paper and onto their intranet, but their relationship-driven culture also supports accessing tribal knowledge the old-fashioned way, person-to-person. With an outward-in approach, Humana demonstrates that they are inquisitive, flexible, and able to learn from every step. If they can do it, without explicit authority or even sanctioned access to tools… What’s stopping you from stepping up?